The Soviet Nuclear Weapons Program: The History and Legacy of the USSR’s Efforts to Build the Atomic Bomb 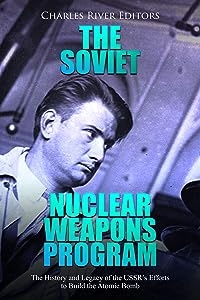 *Includes pictures*Includes a bibliography for further reading*Includes a table of contentsTens of millions died during World War II as the warring powers raced to create the best fighter planes, tanks, and guns, and eventually that race extended to bombs which carried enough power to destroy civilization itself. While the war raged in Europe and the Pacific, a dream team of Nobel Laureates was working on the Manhattan Project, a program kept so secret that Vice President Harry Truman didn’t know about it until he took the presidency after FDR’s death in April 1945. The Manhattan Project would ultimately yield the “Little Boy” and “Fat Man” bombs that released more than 100 Terajoules of energy at Hiroshima and Nagasaki, but weeks earlier, on July 16, 1945, the first detonation of a nuclear device took place in Alamogordo, New Mexico. The first bomb was nicknamed the “gadget,” to avoid espionage attempts to discover that it was, indeed, a bomb. In some sense, the device detonated in July was not really a “bomb” anyway; it was not a deployable device, though it was a detonatable one.With this success, word reached President Truman, who was then attending the Potsdam Conference, and while there, he presented the news to Soviet leader Joseph Stalin. Stalin feigned surprise; in an ironic twist of fate, espionage missions had revealed American nuclear research to the Soviets before it had even reached Vice President Truman. The attacks on Hiroshima and Nagasaki in August 1945, along with the Cold War-era tests and their accompanying mushroom clouds, would demonstrate the true power and terror of nuclear weapons, but in the late 1930s these bombs were only vaguely being thought through, particularly after the successful first experiment to split the atom by a German scientist. Despite the fact the Nazis’ quest for a nuclear weapon began in earnest in 1939, no one really had a handle on how important nuclear weapons would prove to war and geopolitics, so the Germans were hesitant to expend resources on it. Moreover, they were hampered by the fact their policies had compelled Jewish scientists like Liz Meitner and Albert Einstein to flee before the war.For their part, Stalin’s regime had been working on a nuclear weapons program since 1942, relying greatly upon successful Soviet espionage to help lead the way. With intelligence sources connected to the Manhattan Project, Stalin was able to keep abreast of the Allies’ progress toward creating an atomic bomb, so that by 1945, the Soviets already had a working blueprint of America’s first atomic bombs. On August 29, 1949, the Soviets successfully tested an atomic bomb, and with that, the Soviet Union became the second nation after the U.S. to develop and possess nuclear weapons. The nuclear age itself was still in its infancy, but within a few short years the advent of nuclear war loomed over the world and the prospect of a malign dictatorship possessing nuclear superiority kept Western leaders awake at night.The Soviet Nuclear Weapons Program: The History and Legacy of the USSR’s Efforts to Build the Atomic Bomb examines the Soviets’ race to reach the ultimate goal during and after World War II, and how they went about their objectives. Along with pictures of important people, places, and events, you will learn about Nazi Germany’s nuclear weapons program like never before.