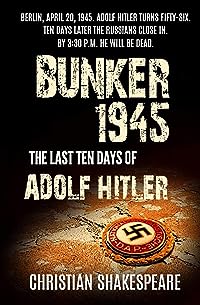 In 1923 during the Munich Beer Hall Putsch, Adolf Hitler threatened to blow his brains out. Twenty-two years later, he did. April 1945 – Berlin. The world had been at war for more than five-and-a-half years – approximately seventy million people were dead across the globe. The epicentre of the twelve-year-old Third Reich was now surrounded, enveloped by bitter Soviet forces hardened by Nazi barbarity in the east over the last four years. As the buildings were blasted into rubble, pounded by Russian guns and bombs, before their troops and tanks, Hitler was hunkered down in his last headquarters – the dark and damp bunker under the Reich Chancellery. As the Third Reich began to crumble as fast as the city’s buildings, what was the state of mind of the tyrant? Only his closest and fanatical allies saw the collapse, none more so than Hitler’s servants, Otto Gunsche and Heinz Linge – two individuals which witnessed the final act of their regime. An act tinged over the last ten days in late April with selfish betrayal, increasingly forlorn hope, pleas, desperation and eventually suicide. As the Soviets closed in with impending vigour, in the concrete tomb below ground and under the thunderous booms of the petrifying battle for Berlin, the mind of the dictator disintegrated into drugs, delusion and a determination to die. Not by the enemy bullet but one of his own. This is the story of the people who held a unique place in world history – the ones who were there when the nightmare of Nazism and the horrors which accompanied it was finally banished as a dark chapter in the story of the human race.