Middle Ages: A Captivating Guide to the Dark Ages and Black Death 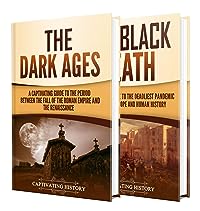 If you want to discover the captivating history of the Middle Ages, then keep reading...Free History BONUS Inside!Two captivating manuscripts in one book:The Dark Ages: A Captivating Guide to the Period Between the Fall of the Roman Empire and the RenaissanceThe Black Death: A Captivating Guide to the Deadliest Pandemic in Medieval Europe and Human HistoryFollowing the fall of Rome in 476 CE, the entire dynamic of Europe underwent a complete shift in power and culture. The Dark Ages was an interesting period of about six centuries, and during it, Europe was still trying to figure out what it was and how it would survive the chaos that followed the fall of Rome. Some of the topics covered in part 1 of this book include:The Misconception of the Dark AgesThe World after RomeThe Rise of the Christian ChurchRome Continues – The Byzantine EmpireThe Rise of the Caliphate and the Conquest of SpainThe Lombard KingdomCharlemagneThe Treaty of Verdun and the Rurik Dynasty – Beginnings of Modern NationsAlfred the GreatOtto 1 and the Founding of a Loose FederationThe Reign of VeniceThe VikingsThe Second Half of the Middle AgesThe RenaissanceAnd much, much more!Some of the topics covered in part 2 of this book include:The First PandemicsThe Black DeathThe Unlikely Use of the Black DeathRumors and ArrivalPerceptions Vs. The RealityThe Ultimate EqualizerStealing the Future – Princess JoanDecline of the Catholic Church and the Rise of MysticismArt of the Black DeathThe First Quarantine and Successful ContainmentBeyond the Human TollLasting Effects on Europe’s FutureAnd much, much more!So if you want to learn more about the Middle Ages, scroll up and click the "add to cart" button!