Sweet Land of Liberty: Old Times in the Colonies 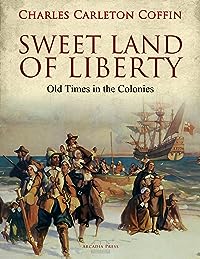 "The settlement of our country was the beginning of a new era in human affairs. The people of England, ever since the days of King John, when the barons compelled him to sign the Magna Charta in the meadow of Runnymede, had struggled against tyranny; and when the emigrants sailed across the Atlantic to rear their homes in Virginia and New England, it was the transplanting of liberty to a continent where everything was new, and where the conditions that surrounded them were wholly unlike those of the Old World.This volume is an outline of some of the principal events that transpired during the colonial period of our country, and portrays the ardships and sufferings of those who laid the foundations of a new empire. It will show how the Old World laws, habits, and customs were gradually changed; how the grand ideas of Freedom and the Rights of Man took root and flourished..."Charles Carleton Coffin