MEN GOING THEIR OWN WAY: The Anti-Feminism Survival Guide 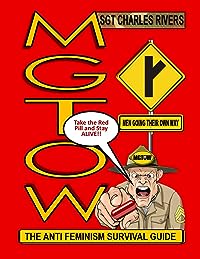 Globally, women have finally succeeded at doing what two millennia of men could not: they have united males from all backgrounds, cultures, and races against radical feminist doctrine. Men have coalesced in joining Men Going Their Own Way (MGTOW) and Teens Going Their Own Way (TGTOW) through the manosphere. But what of me? After more than twenty-one years as a marriage coach and counselor, I realized that I could no longer recommend that either young or old men get married. In fact, I awoke one morning knowing that I could no longer give any positive counsel, save for “leave these angry women the hell alone.” I felt then, as I do now, that the so-called radical feminist movement was putting the kibosh on everything loving I was trying to hold together in the marriage arena. What I found most funny was that every feminist who tried to destroy the love between man and woman had held onto their relationships longer than any other female. I came to view feminism as little more than a new form of indentured servitude for men with the tacit approval of the governments in the countries where it had been allowed to fester and grow. That’s when I decided to no longer help women enslave men but to reveal all their secrets, which I had learned during my two decades of counseling. I would help men who were married, single, or separated to untangle their lives from the women who were exchanging the tenets of love for hate. It was on that day that I became one of the Men Going Their Own Way.ABOUT THE AUTHOR Charles Rivers is a Southern California based Relationship Communication Specialist and Teacher. He is the author of, HE, Lucid, Peace In Mind, Karma Shifts, Married without Baggage, The Good Marriage Maintenance Kit, How to Become Your Spouse’s Best Friend, Apocalypse Angel and Heart of the Marriage. He has appeared on television in support of marital love and spoken weekly on a radio show entitled, “Relationship Thursdays.” He is an army combat veteran and the winner of the Civilian Medal of Valor for bravery.