The True Story of Andersonville Prison: A Defense of Major Henry Wirz 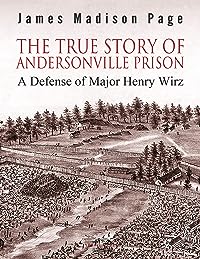 During the Civil War, James Madison Page was a prisoner in different places in the South. Seven months of that time was spent at Andersonville. While there he became well acquainted with Major Wirz, or Captain Wirz, as he then ranked. Page takes the stand that Captain Wirz was unjustly held responsible for the hardship and mortality of Andersonville. It was his belief that the Federal authorities must share the blame for these things with the Confederates, since they well knew the inability of the Confederates to meet the reasonable wants of their prisoners of war, as they lacked a supply for their own needs, and since the Federal authorities failed to exercise a humane policy in the exchange of those captured in battle.The writer, "with malice toward none and charity for all," denies conscious prejudice, and makes the sincere endeavor to put himself in the other fellow's place and make such a statement of the matter in hand as will satisfy all lovers of truth and justice.