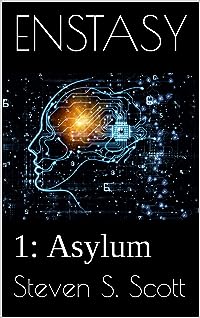 Enstasy is an apocalyptic metaphysical mystery tour.In the Enstasy story, a movement of philosophers and physicists from the hippie generation at the Academy of Enstasy develops meditative practices that unlock profound powers of the human mind, including the ability to travel in time. This takes a dangerous turn when hyper-realistic computer simulations are secretly created outside the Academy, that directly operate on the mind to more rapidly and effectively perform those practices. While the Academy strives to elevate the state of humanity and shuns technology, technology is nonetheless combined with its practices to threaten the very survival of the world.The word enstasy is similar in origin to ecstasy, but while ecstasy is by definition irrational, enstasy is the embodiment of rationality. Enstasy is the use of meditation to achieve enlightenment, particularly regarding political dysfunction.The Enstasy story deals with the pitfalls of simulated reality, bearing similarity to the feature film The Matrix and the novel Ready Player One. The first stage of the story involves thirteen people stranded together in a place that’s not what it seems, drawing inspiration from the television series LOST. The Academy of Enstasy is in effect an underground institution of magic, somewhat akin to the Harry Potter novels. The Enstasy series of novels:1: Asylum2: Academy3: Atonement4: Apocalypse5: AscensionBook one, Asylum, is solidly science fiction, being primarily about simulated reality. Computer simulations are used to perform the meditative practices of the Enstasy movement. As with the full arc of the series, the Asylum story is driven by the romantic relationship of the two primary characters, and a doctor who conducts the simulations, who calls himself Scious, encourages his subjects to argue over politics. His motivation for doing this is part of the overall political arc of the series.