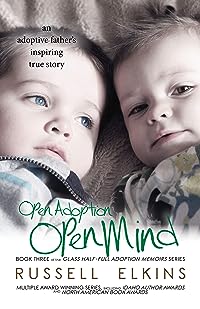 The Glass Half-Full Adoption Memoirs series has won multiple awards, including North American Book Awards and Idaho Author Awards three consecutive years.Everybody knows what adoption is, but adoption has changed dramatically over recent decades. “Open adoptions” used to be unheard of, but have quickly become the norm over recent years. Open adoptions create an opportunity for biological parents to remain connected with the child even after the adoption takes place. Emotionally, this is still largely uncharted territory for everybody involved and relationships can be difficult to navigate. Although these connections can be stressful and challenging, they are also beautiful and inspiring. Whether you are simply someone interested in an amazing and touching story, or whether you are hoping to be educated on what it might be like to walk a mile in the shoes of an adoptive parent, Russell Elkins holds nothing back as he takes you along for the ride. Told from the point of view of an adoptive father, the journey Russell and his wife took is such a roller coaster ride you would think this true story was fiction.Book 1: Open Adoption, Open HeartRussell and Jammie have struggled with infertility issues for years before deciding that adoption is right way to build their family. They quickly find out that adoption is not as simple as filling out some paperwork and waiting for the right child to join them at home. Sometimes adoptions fall through. People change their mind. Hearts are often broken during the process. The actual adoption does not take place at the end of the book because it is by no means the end of the story—it’s the midpoint of the journey as adoption relationships have only just begun. Book 2: Open Adoption, Open Arms Russell and Jammie thought their second adoption would be a bit easier since they had already gone through the process once before and knew better what to expect. They were wrong. A new situation and new relationships came with unique trials. This new situation stirred up emotions from Russell’s past—from before he even met his wife, Jammie—making it possible for him to relate to the biological parents on a level he had never experienced before. Book 3: Open Adoption, Open MindRussell and Jammie’s journey did not end with the details of the last page of book two. Not by a long shot. Some relationships blossom while others find hard times. Russell and Jammie even begin to develop a relationship with a birthfather who previously wanted nothing to do with them—a relationship that proves to be unpredictable and difficult. Most importantly, the journey takes new twists and turns as the children become old enough to think for themselves (and they do not process their story the same way as each other).