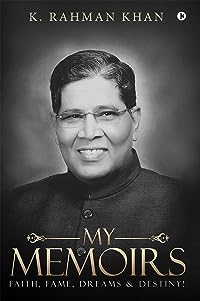 This is the life story of Dr. K. Rahman Khan, Former Union Minister, who for forty long years served the country in various capacities – as a Member of the Legislative Council of Karnataka State, as General Secretary of the Indian National Congress, as Chairman of the Legislative Council of Karnataka, as Member of the Rajya Sabha, as Deputy Chairman of the Rajya Sabha, not once but twice, and as Deputy Leader of the Congress Party in the Rajya Sabha. After having retired from political office in April 2018, some people may have thought that he should now spend the rest of his time leading a quiet and sedentary life! But for a person like him, for whom social engagement has been heart and soul, that may not be quite the thing to do. He has learnt many lessons from life, and sharing them may hopefully give some direction to others. Shri Rahman Khan has been deeply connected with a wide spectrum of social, cultural, literary, educational, artistic, scientific and other social interests. He has been involved with several trusts and foundations for promoting education and uplifting the weaker sections of society, including minorities in southern India, and has come to be known as a popular philanthropist. His mantra is to accord topmost priority to education for the all-round development of the people. One of the purposes in penning this autobiography is to help future generations learn and be inspired by Shri Rahman Khan's story, so that they can set their wings high to work for the wider society.