Wardens Book 1: The Conqueror of Worlds 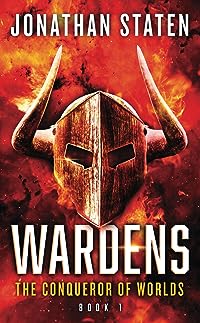 In 3013, the Wardens were called to investigate an attack on a small city called Icaru on the planet Venyr. On their way to the planet, they run into a powerful foe: an intergalactic warlord whom calls himself Victus, The Conqueror of Worlds. In the ensuing battle, one of the Wardens, Richard Harrison, dies at the hands of Victus. In an unusual act of mercy, Victus allows the Wardens to escape. Fast forward three years later, in 3016, we follow the mundane life of Jansen Harrison. He's in his twenties, young, and yearns to find his true purpose in life. Then one day, after receiving a roundhouse kick to the face, he wakes up to find a stranger sitting next to his bed. The stranger calls himself, Travis Griffin. He informs Jansen that his father, Richard Harrison, had died three years ago. The only problem with the claim is that Jansen believed his father to have died 'ten' years ago. Confused and angered, Jansen meets up with Travis at an undisclosed location where he learned about the Wardens. They're an elite special operations team based on Mars and serve as the first line of defense against any threat that exits beyond the planet Venyr. It is also where Jansen learned that each Warden (four in total) is endowed with powerful spirits called the Augurs that allows them to do miraculous things ranging from superhuman strength to dark sorceries. Jansen reluctantly joins Travis and heads to Mars to meet the rest of the Wardens: Christina Ward and Leo Creed. And what follows is a journey of self discovery and the start of a thrilling adventure to save the galaxy.