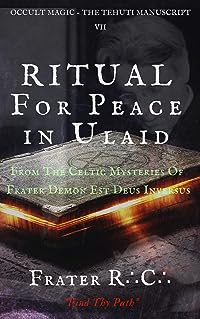 William Butler Yeats, Irish poet, Noble Prize Winner and Senator once famously wrote about his occult studies in the hermetic Order of the G.D.:"Now as to magic. It is surely absurd to hold me “weak” or otherwise because I choose to persist in a study which I decided deliberately four or five years ago to make, next to my poetry, the most important pursuit of my life…If I had not made magic my constant study I could not have written a single word of my Blake book [The Works of William Blake, with Edwin Ellis, 1893], nor would The Countess Kathleen [stage play, 1892] have ever come to exist. The mystical life is the center of all that I do and all that I think and all that I write." - W.B. Yeats (Frater Demon Est Deus Inversus)Since the early '90s I have actively studied and pursued and enjoyed following the path of his Celtic, mythological, hermetic spirituality. In 1999, twenty years ago now my first book was released (for strictly academic research to use and further my scholarly studies professionally) and it has never ceased to open doors. I believe this is due to my rigorous research of and methodological approach to secondary resource materials at that time extant. Today, looking back and forward to the mainstream release with expansions through new access to studies with the existence of the internet and collaboration of other scholars in my field and especially the A.S.E., I am excited to finally share the depth of some of this work and to which it may additionally be applied to the academic study and practical spirituality of Celtic and hermetic spiritualities.