My Life in Yankee Stadium: 40 Years As a Vendor and Other Tales of Growing Up Somewhat Sane in The Bronx 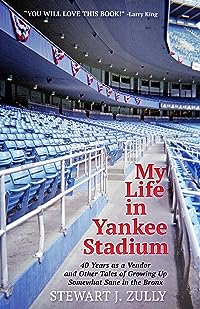 “As a life-long Dodger fan, I found "My Life In Yankee Stadium" a great read. It is funny, heartwarming, and a great look at baseball from the guy selling refreshments. You will love this book!!” -Larry King "My Life in Yankee Stadium" is a collection of stories and anecdotes from a vendor who started working at Yankee Stadium in 1970. Beginning at the age of fifteen tossing peanuts at a New York Giants football game, Stewart J. Zully vended at more than 2500 events, including playoff and World Series games, no-hitters, a Muhammad Ali heavyweight fight, a visit from the Pope, and, of course, the legendary Red Sox-Yankee rivalry. Here is a personal look at a vendor’s life straight from the basement of the stadium to his other life in show business. Ironically, a commercial he appeared in won an Emmy and triggered a long-lost romance with a former stadium employee, whom he hadn’t seen in twenty-four years. She is now his wife. "My Life in Yankee Stadium" contains unusual encounters with James Gandolfini, Jack Nicholson, Mel Brooks, and many others, whether on a movie set or in the stands at the ballpark. The quirky vendors, the bizarre assortment of fans, and the character of New York City itself all come alive as Zully gives the unique perspective that only an insider has. Filled with exclusive photos, "My Life in Yankee Stadium" is a look at New York from the sixties to the present day, taking readers behind the scenes at the most famous stadium in all of sports.