A Lady for the Secret Baron: A Historical Regency Romance 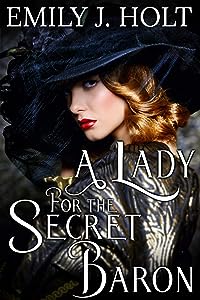 Clementia Highfield is the only daughter of the Earl of Estley.She has always been aloof despite her father's many attempts to showcase her in society. When she meets and finds herself falling for Captain Butler, she is confused by the fact that she has fallen for so humble a man. Being seen with him alone smirches her honor shamefully. And when it appears that he is a dangerous criminal and ends up imprisoned in Reading Jail, she has no idea what to do. But Hugh Butler is kind, staunch and honorable. When he defends a fellow prisoner he finds himself finding out a different story. One of betrayal that is, for the man who accused him of theft unjustly is a rival to his hand for Clementia. He has to help her get away from him, whatever the cost to himself. A tale about tales, truth and the overwhelming power of love set against the dazzling and deceptive world of Regency-period England.