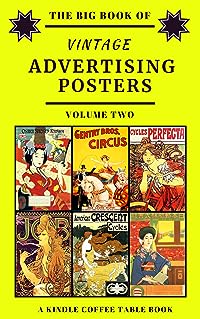 ENJOY HUNDREDS OF GORGEOUS DIGITALLY-ENHANCED VINTAGE ADVERTISING POSTERS!Art Lovers will Love these Stunning Vintage Posters!(This Kindle Coffee Table Book is the second volume of a three-volume set of vintage hand-painted advertising posters. The entire series consists of over 500 high-resolution images that have been digitally-enhanced in order to give them maximum impact. Most posters are from the late 19th and early 20th centuries.)Once upon a time advertising was art. Before radio and television became the primary mediums for advertisers in the middle of the 20th century, posters dominated the advertising landscape around the world. Beautiful, hand-painted posters were created by some of the world’s most prominent artists - men like Alphonse Mucha and Jules Charet mass-produced thousands of colorful posters inviting consumers to purchase a wide variety of goods and services, attend special events or travel to exotic locales.Lithography, the printing process that made it possible to mass-produce posters, was invented in 1798, but it wasn’t until 1880 that the process was finally able to reliably produce posters quickly and cheaply. This breakthrough was due to an innovative process created by Jules Charet called the stone lithographic process, which allowed artists to achieve every color in the rainbow. Artists were suddenly able to utilize their superb artistry and remarkable craftsmanship to economically create gorgeous works of art on paper posters and a brand-new art form was born.As the poster craze exploded around the world in the 1890s, artists took the opportunity to celebrate the unique cultural institutions of their own country in their art. So, for example, French posters featured a lot of cafes and cabarets, while Italian posters focused on opera and fashion.Art Nouveau, the elegant style of art that flourished in the 20-year period from 1890 to 1910 and was popularized by Alphonse Mucha’s posters, eventually lost its luster with the void being filled by a young Italian artist named Leonetto Cappiello. Instead of utilizing the finely detailed work that characterized Art Nouveau, Cappiello focused on creating a single image, usually humorous or somewhat bizarre. He wanted to create an image that would quickly capture a person’s attention as they walked along a busy street. His innovation in poster design was so important that today he is often referred to as "the father of modern advertising."