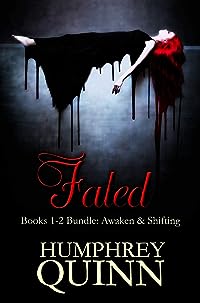 Meghan and Colin Jacoby have never questioned their uncle's only rule to live by--never stay in one place for too long. Instead, they've traveled the countryside with him in his travel trailer, moving from place to place for nearly thirteen years never having a reason to question why he chose this unsettled life--until now.All they've come to know is about to change in this fast-paced, action-packed saga that blends the modern-day world with the enchantment of a classic fantasy adventure.Through an unexpected series of events and strange encounters, they enter a foreign world that straddles their own--one of new friends, magical mysteries, and spellbinding twists that send them on dangerous missions and facing deadly enemies that are only supposed to exist in the world of make believe.But as these encounters and events get stranger and scarier and become all too real, the true quest reveals itself and the adventure will take on a whole new meaning--to unravel the mysteries about their past and revealing why they have to stay on the move, as well as discover where they truly belong and if there's such a thing as a place called home.Humphrey Quinn delivers an epic coming of age fantasy tale that captures the imagination and has created a new literary classic for the ages.The adventure begins in Maine with our characters just turning thirteen and ends eleven books later with them aged seventeen. It's a mix of fun and humor, sibling rivalry, magic and misadventure, coming of age struggles as well as darker themes like betrayal, and consequences of choices made, and even has some age appropriate romance nearer the middle to the end.THE FATED FANTASY ADVENTURE SERIES IS COMPLETE:Please Read in Order...Book 1: AwakenBook 2: ShiftingBook 3: EmbraceBook 4: BrokenBook 5: DividedBook 6: TakenBook 7: ControlBook 8: ForsakenBook 9: SacrificeBook 10: RedeemBook 11: Ascend (The Final Book in the Series)GENRES:Portal fantasy, urban fantasy, epic fantasy, exploration and discovery, supernatural suspense, paranormal adventure, fantasy quest, time travel, young adult fantasy, teen paranormal, children's adventure books, magic, witches, middle grade, juvenile fantasy, action adventure, coming of age, completed series