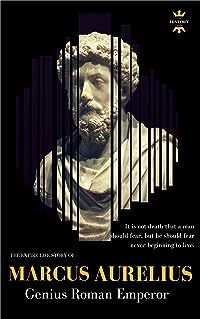 by THE HISTORY HOUR

Marcus AureliusGenius Roman Emperor * * *Download for FREE on Kindle Unlimited + Free BONUS Inside!* * *Read On Your Computer, MAC, Smartphone, Kindle Reader, iPad, or Tablet.Marcus Aurelius was an outstanding person and Emperor of Ancient Rome. He was far more concerned with ways of thinking than with warfare. Being a small boy he applied himself to task with education. Marcus preferred others over himself, putting his own welfare aside for the good of other people.His nature is obvious in his kindness and consideration for others; but his sharp intelligence is also evident in his writing and in his excellence in jurisprudence. People called him a Great Emperor and a Philosopher King. Inside you will read about...The Young MarcusTraining in OratoryAntoninus's reignAntoninus's deathPhilosopher turned EmperorMarcus and Lucius's reignThe Slumbering TiberThe War with the ParthiansThe Antonine plagueThe youngest Consul in Roman historyThe End of the Pax RomanaAnd much more!This book is a chronological biography of his life. Its aim is to not only describe the historical events of his life, but also to delve into his character. It explores who the man really was, especially the contrast between the high station thrust upon him and the simplicity he longed for.