A Quest From West to East - The Grand American Citadels 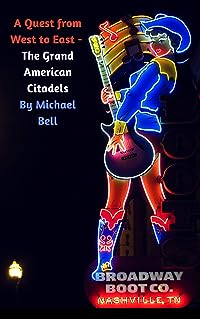 BESTSELLING AUTHOR WITH OVER 15 BOOK SALES!"I have waited 600 years for this" William Shakespeare"This book was so good, that I travelled to the future in a phone box to buy it" Bill or Ted"I may be a horse but I know a good travel book when I read one" Black BeautyAmerica is an alluring and intoxicating realm. Whether we realise it or not, it has infiltrated British culture through TV, books, and music. Many of us know more about America than we do about our own homeland. We have become addicted to box-set dramas, celebrity culture, and the American political scene. News of America travels on the very wind in Britain and the fate of that country is intertwined with our own.I had dreamed of making this quest for many years. Despite growing up in the 'picturesque' city of Sunderland in Northern England, I had caught the American culture bug through reading crime novels and listening to Bob Dylan, but it wasn't until I arrived into California that I realised just how much. I literally felt like I had stumbled into my own surreal Hollywood movie. Palm tree lined streets, food portions that could literally feed the entire world and the glitz and glamour of the Hollywood walk of fame. This was just day one.I would gaze upon the otherworldly beauty of The Grand Canyon, lose money in the gambling metropolis of Las Vegas and venture through the musical realms of Memphis, and Nashville. I would enjoy spontaneous Jazz concerts on the streets of New Orleans, visit the scene of an assassinated president and enter the world of NASA. I would cross the barren deserts of New Mexico and Death Valley and enter the capital citadel of Washington DC. Beyond the history, landscapes, and culture, I would meet so many diverse characters and this alone was enough to write an entire novel. My journey was anything but straightforward but fear not, I was traveling with my wife, so there was always someone to blame me when things went wrong.