Kaiser Wilhelm II: A Life From Beginning to End 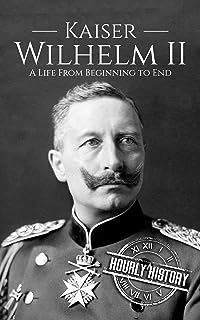 Kaiser Wilhelm II* * *Download for FREE on Kindle Unlimited + Free BONUS Inside!* * *Read On Your Computer, MAC, Smartphone, Kindle Reader, iPad, or Tablet.Kaiser Wilhelm II was the last of the German emperors who reigned over the German Empire and Prussia. He was a man who thought himself to be quite adept at foreign affairs and diplomacy. The truth was, however, that this man’s talent seemed to lie in being able to alienate entire countries after only one meeting with government officials or monarchs. Inside you will read about...✓ Born with a Disability✓ The Year of the Three Emperors✓ Leading Germany to World War I✓ The Last German Emperor✓ Wilhelm’s Exile and World War IIAnd much more!Despite the fact that he was one of the sparks that lit the fire of World War I, Wilhelm was quite an intelligent man. Some say his diplomatic failures happened because of mental illness; others claim that it was an inferiority complex caused by the physical disability that he was born with. Whatever the case, Wilhelm II’s time as a world leader was riddled with political blunders and examples of what not to do in terms of diplomatic policies and practices. In this book, we will explore his life, both personal and professional, to find out more about how Kaiser Wilhelm II became the last German emperor.