A "New Age" or "Messianic Age": How to Bring It Into Being 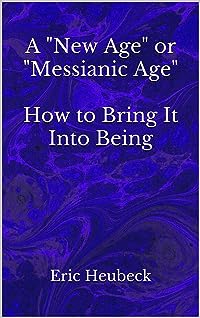 The Bible is an often obscure, cryptic, and esoteric book—many religious believers and non-believers can agree on that much. But what if the authors of the Bible were actually expressing opposition to the very obscurity and esotericism of their own writings, in their own writings? Furthermore, what if the ending of the “present age” and the arrival of the “Messianic Age” predicted by the Bible prophets could only ever occur once that entire cryptically symbolic “esoteric” or “prophetical” manner of religious discourse—one that is found in all traditional religions—had already been seriously questioned, confronted, and finally repudiated by humanity as a whole?As strange and surprising and paradoxical as these possibilities might sound, in this book Eric Heubeck carefully analyzes the contents of the Bible to reveal a great deal of compelling evidence arguing in favor of just such an hypothesis—far more than might at first be apparent. As you progress through the book, you will be amazed to watch as the “anti-esotericist message” hidden within Bible prophecy gradually takes shape before your eyes.