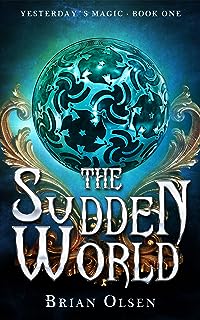 The world before is coming back...Yesterday, the world was magic. Yesterday, the world was at war. Yesterday, the world’s greatest sorcerers rewrote reality in a desperate effort to stop the Common King, the most powerful mage the world had ever known, who rained death and destruction upon the land and threatened all magical creatures with extinction.Today, Chris Armstrong is an ace student, a lacrosse hero, and a drama club superstar. He’s the golden boy of Charlesville Academy and life is perfect. That’s about to change.Chris has a nightmare of something monstrous, something evil, something waiting. He wakes, shaken, to a dangerous new ability he can’t control. Chris is a logomancer, able to manipulate awesome magic with the power of one single word.He’ll have to learn to control this word fast, because he’s not the only logomancer in town. His friends and teachers awake to powers of their own, but only Chris can protect them from the return of evil magic from the world before. The Common King is clawing his way back into reality, seeking to rule our world as cruelly as he did the last...and hiding behind the face of someone Chris loves.By the night of Chris’s seventeenth birthday, he’ll learn that his perfect life is a terrible lie. And the Common King is closer than he thinks…THE SUDDEN WORLD is a young adult contemporary fantasy. If you like interesting diverse characters, harrowing complex villains, and thrilling magical adventures, you’ll love the Yesterday’s Magic trilogy.Chris’s exploration of his powers and battle against the Common King continue in THE FLOATING ROOM and conclude in THE COMMON KING, but you can start his adventure right now!Scroll up and download now!