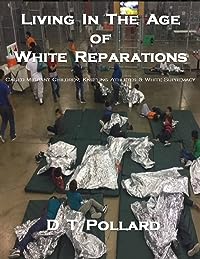 Racial tensions in the United States were simmering and in June of 2018 they boiled over as images began to flow out of the United States of America showing migrant children separated from their parents at the southwestern border confined within metal cages per orders from the President of the United States. Outrage exploded within the United States and around the world, but some were supportive of the migrant family separation policy and fully backed President Trump’s tough immigration stance. The migrant family separation crisis was completely manufactured by the President and another in a long line of intentionally created racial and cultural firestorms from the Muslim ban to kneeling football players, but that was the point, massive distractions to mask a carefully thought out plan, White reparations.The election of Donald Trump was based upon a multiple layered coalition of people desperate for better jobs, those voting their political party line and others attracted to the racist tinge of his message. Anger existed within a segment of the American population that felt marginalized because others had risen at their expense and they wanted conditions reversed to the state when they were on top by default. Those demanding that America be made great again, even if it meant pushing minorities, immigrants and women to the back of the line, wanted payback. Once Trump took office, the real work began to extract reparations and funnel wealth to those deserving to have their rightful perch at the top of the socioeconomic heap, but it was not going where those shouting at his rallies thought when they voted for him.