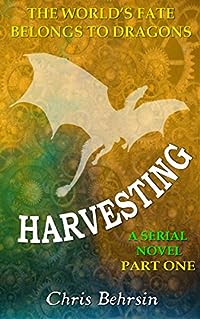 A fast-paced tale of dragons, airships and an intoxicating drug called secicao.In a world of airships and automatons, Pontopa Wells and her dragon Velos are the leading producers of the superpowered caffeine-like drug, secicao, in the Five Hamlets.When Faso Gordoni, an incredibly arrogant entrepreneur, enters Pontopa's life, her world is sent topsy-turvy as she now has a new competitor in town. She despises Faso for the fact he uses automatons for his secicao refinement process since automatons also killed dragons in the Dragonheat man vs. dragon wars. Things get worse still when King Cini III orders the pair to work together to make the best secicao in the world.There’s trouble stirring down in the Southlands, the king’s nephew is reported missing and a fugitive is on the loose.Enter a world of magic, secicao-tech and adventure, in this eight-part Steampunk series like none other told before.