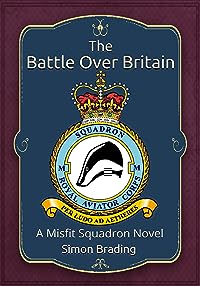 The Second Great War is going poorly for the Kingdom of Britain - the British Isles are under siege and the only thing standing between the all-conquering Prussian army and victory is a thin strip of blue water and the gallant men and women of the Royal Aviator Corps.Aviator Sergeant Gwen Stone is one of those women, but almost as soon as she begins her fight against the Prussian air force, Die Fliegertruppe, she is stripped of her wings and imprisoned in disgrace for illegally modifying her aircraft.As the battle over the skies of Britain progresses and it looks like the Prussians are going to be as dominant in the air as they were on the fields of the continent, the hopes of the beleaguered nation come to rest firmly on the shoulders of Misfit Squadron, an elite group of pilots who don’t always pay strict attention to military discipline, and Gwen is given a chance to redeem herself by joining them.