MotorCycle: Beauty is the Beast 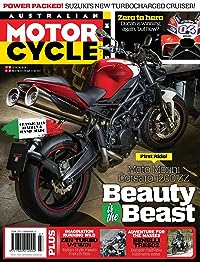 “ROSSI HAS TESTED at Misano” our stand-in Sub-editor Steve Kealyannounced with a tone of incredulity when the press release fromMovistar Yamaha arrived. It took a second for the information to sinkin; it only felt like a fortnight since we were sent scrambling to ourkeyboards when news filtered through that the Italian had brokenhis leg in a dirt bike crash. A quick check of the datesrevealed it had been just 19 days, and as I readthrough the press release, I began to questionwhat it is that motivates the nine-timesworld champion. At 38 years old, he isat the tail-end of a brilliant MotoGPcareer, a career that saw him claim hisfirst world title 20 years ago aboarda 125cc Aprilia. There have beeneight more titles since, seven in thepremier category spanning the 500cctwo-stroke, and 800c and 1000ccfour-stroke eras. I wrote down aquick list of motivational factorsin the hope of putting my finger onsomething - anything. Money? Don’tmake me laugh, fame? Pffft, a contractrenewal? Nope, this year’s title? – unlikely.Rossi has bounced back from injury before,but at least one of the above would have beena motivating factor. Maybe this time it’s simplybecause he loves to race, maybe that has always beenhis motivation? Instead of getting back on a MotoGP bike less thanthree weeks after suffering displaced fractures of the tibia and fibula,a much easier option could have been to release a statement sayingthe injury is worse than first thought and plans to return have beenplaced on hold. If Rossi is this keen to get back to racing at this point inhis career, will he ever really be able to retire?