Four Weeks in the Trenches 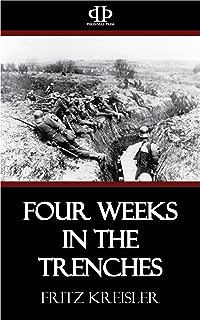 This brief record of the fighting on the Eastern front in the great war is the outcome of a fortunate meeting. The writer chanced to be dining with Mr. Kreisler soon after his arrival in this country, after his dismissal from the hospital where he recovered from his wound. For nearly two hours he listened, thrilled and moved, to the great violinist's modest, vivid narrative of his experiences and adventures. It seemed in the highest degree desirable that the American public should have an opportunity of reading this narrative from the pen of one in whose art so many of us take a profound interest. It also was apparent that since so little of an authentic nature had been heard from the Russo-Austrian field of warfare, this story would prove an important contribution to the contemporary history of the war.After much persuasion, Mr. Kreisler reluctantly acceded to the suggestion that he write out his personal memories of the war for publication. He has completed his narrative in the midst of grave difficulties, writing it piecemeal in hotels and railway trains in the course of a concert tour through the country. It is offered by the publishers to the public with confidence that it will be found one of the most absorbing and informing narratives of the war that has yet appeared.