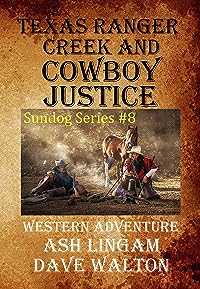 As the small Texas Ranger patrol returned from Tombstone, Arizona, and New Mexico they ran across two dead cowboys out on the trail of the Great Plains to El Paso. They were murdered by bushwhackers with a badge. In an attempt to stop a deadly range war with the Scottish born Seth Bogardus, Texas Ranger Captain Ridge Creek brings his best Rangers from Laredo to face off with the infamous Marshal Dan Dowd, along with twenty hired gunslingers in beige dusters and Winchesters repeater rifles, guns for hire to the highest bidder. Mister Bogardus himself, a wealthy ranch baron and the man with the intention of taking every substantial water source from the New Mexican border to the city of El Paso by force with the bounty hunter, Tom Horn at his side.The danger in Texas has not diminished, making the need for such men as Captain Creek and his band of Texas Rangers imperative. It is said, in order to kill wicked men you need a bad man, and Creek is up to the task.Ash Lingam reaches new heights with his latest novel of the Wild West and the Texas Rangers. Bringing the 1860s to life in his Tales of Western Adventures in Cowboy Justice. (Sundog Series Vol. No. 8)