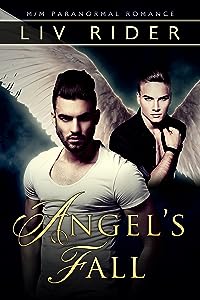 The angels exiled him and stripped him of his wings. Now they want his help.The last thing he needs is to fall for one…. Half-angel Dashiell Lam has a lot of reasons to distrust angels after they exiled him four years ago. When angel Cael Moriah comes looking for him, Dashiell’s certain he’s no different—even if Cael’s the most gorgeous angel Dashiell’s ever seen. Dashiell’s instinct is to send him packing, but he can’t deny the effect Cael has on him. Then Cael makes him an offer he can’t refuse: help him, and the angels will restore his wings.Cael’s done everything the angelic order has ever asked of him, but working with a jaded fallen angel? Not part of the plan. But he has a mission to complete, and Dashiell’s the only one who can help him. It doesn’t matter that Dashiell inspires a very un-angelic desire in him. The last thing he needs is to get involved with someone who thinks angels are the enemy.Angels aren’t supposed to form attachments—and they definitely aren’t supposed to fall in love. But sometimes even angels can’t resist temptation. Can an angel and fallen half-angel work together to save the world—and each other?Angel’s Fall is an m/m paranormal angel romance with a HEA and no cliffhangers.