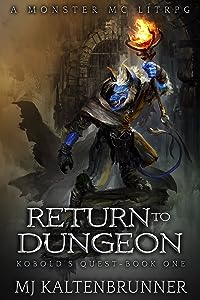 This downtrodden kobold finds himself with one hell of a quest ...Kek has spent his life being treated like a dog, but he's only dog-like in appearance. You see, he's a kobold who originally came from a dungeon. And he's spent most of his life enslaved to a gang of exiled mercenaries hiding out in a deadly jungle. When Kek gains the power to see the hidden mechanics of reality and learns to "game" them to expand his skills and find hidden meanings, he is soon entrusted with a noble quest. He must return to the dungeon where he came from and rescue his people from servitude to the dungeon lord! Faced with untold dangers, Kek is going to need allies—such as a sweet muck fairy with a killer streak, a deadly-beautiful siren who fights best au natural, and a sensual cat woman with lightning quick moves. They are sure going to keep this lone kobold on his toes. Throughout this quest, Kek will learn the hard way that one of the greatest opponents a hero confronts is his own self-doubt. This is a LitRPG with a twist. There is no VR. The fantasy world is real. The game mechanics are part of a unique magical power that only the lucky few obtain. If you're not into this sort of thing, maybe it's time you give it a go. There's also a fun and adventure-packed story that will keep any fantasy reader engrossed right up until the end.Book two in the series is planned for launch early 2018!