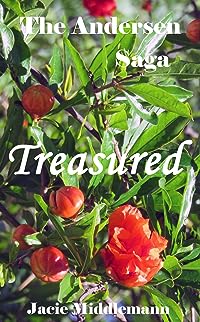 Livia Andersen was a woman who held her family together with a quiet smile and an iron will. It’s been months since her death and her children and grandchildren she leaves behind continue to grapple with the shifting changes in their lives now that she’s gone. For some of them it is about far more than adjusting to her absence in their lives. Trisha Andersen doesn’t do anything without careful deliberation. She can’t remember the last time she made plans involving a man that had her questioning her own judgment. Maybe it’s the simple fact that she’s never made plans with a man for anything other than where to go for dinner. It was a risk…one she hasn’t taken before. One she’s not certain she’s ready to take now.Chris Andersen’s life seems to be the stuff of dreams. His paintings sell before he finishes them and the list of those wanting first dibs on those he hasn’t yet begun is growing. He’s settling into the cabin his grandmother once called home at his aunt’s lakeside resort. The legal aid foundation he once dreamed of forming is on solid ground and there’s no reason it shouldn’t stay that way. But despite all that there are still nights when instead of sleeping he paints while the darkness surrounds him.The Andersen Saga is a story of family. It is a story about joy and loss, hope and sorrow, betrayal and regrets, unconditional forgiveness, high expectations, and unwavering loyalty. It reminds that at the heart of who we are is the family we come from, the family who stands behind and beside us and at times against us. And who we become isn’t just a result of those still with us but those too that we’ve lost along the way. It is about the twist and turns every family deals with, the conflicts from within, and the never ending desire for acceptance and respect.Treasured is the eighteenth book in the ongoing Andersen Family Saga. Other books in the Andersen Family Saga include Betrayal, Resolute, Broken, Found, Choices, Regrets, Remember, Forgiven, Truths, Always, Expectations, Decisions, Disillusioned, Believe, Relentless, Everlasting, and Enduring.The Andersen Family Saga is a series of novellas, classified by Amazon as Short Reads. If you love sitting down with a novella style book you will enjoy the Andersen Family Saga series. These books fall between the forty-five minute to two hours reading time category of Amazon “Short Reads.”