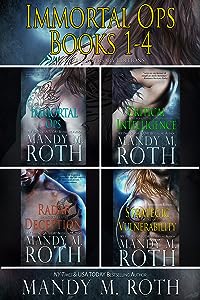 Paranormal Shifter Military Special Ops RomanceBooks 1-4 in the Immortal Ops Series!Contains:Immortal OpsCritical IntelligenceRadar DeceptionStrategic VulnerabilityImmortal OpsImmortal Ops Team Captain Lukian Vlakhusha is having issues with his newest target, Peren Matthews. His higher ups want her eliminated. He simply wants her. The alpha side of him demands he claim her—that is, if she’ll have him. After all, he’s what she fears most—a wolf shifter. But there is more to Peren than even she’s aware of and the enemy is closer than anyone imagined.Critical IntelligenceRoi Majors, wolf-shifter and second in command of the I-Ops, is having a hard time believing that Intel can only get half the information needed to bring down an underground ring of vampires with big-spending backers who are hell-bent on creating a race of supernaturals with multiple strands of DNA in them. When he finds himself paired with the one woman in the world who seems immune to his self-proclaimed charms, he can’t wait to see her to safety and then bid her good riddance. He never counted on falling in love with her. And he sure in the hell never counted on her claiming to be an agent with a branch of the government no human should know about.Radar DeceptionDr. Thaddeus Green survived a werepanther attack long ago, leaving him immortal and a member of the I-Ops team. He’s dedicated his life to genetics and to serving his country. After his mutated DNA led to the death of his loved one, he vowed to never let anyone close to his heart again. Try as he might, Green is unable to stop the mystical pull to the tall, leggy blonde with a sharp tongue and an even worse bite. Thinking Melanie is suffering from mating withdrawal, Green is prepared to do what he must to assure her survival, even if it means claiming her for himself, regardless of his need to protect his heart. Little does Green know that fate has been preparing him for Melanie Daly all his unnaturally long life.Strategic VulnerabilityHeld prisoner in a remote testing facility in the middle of the Brazilian rain forest, subjected to torture and abuse, shape-shifter and alpha male Wilson Rousseau has long since given up hope of being rescued. Days blend together until he can’t help but long for death. Saved from his isolated hell by a female’s distress call, he feels an instant connection to her.Kimberly thought she was taking a trip to South America to study indigenous plant life. She had no idea she was playing into the hands of a madman whose goal is to create a genetically altered army of super-soldiers. When she finds herself locked in a cell with Wilson, a man who would give his life to save hers, there is an instant attraction. But the dark secrets surrounding their imprisonment may change their lives forever. Can they find a way to beat the odds and be together, or will the madman win?