Golf Tips from the All-Time Great Ball Strikers: A Book of Revelations 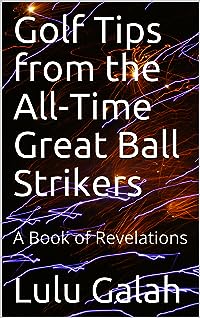 I am a ghost writer.I died of pneumonia in Bedford, Massachusetts at the age of eighty-eight.As a young man, I was a phenomenal golfer playing at the highest levels of amateur competition. I had a big, modern swing, but I always cut a traditionalist’s figure. My self-effacing, uncomplaining manner, my chesty stride, my clothes, even my tripartite name seemed a thing of the pastoral, perhaps English, past. Tweed, of course, was my preferred fabric. I once showed up on a course in all-tweed, including tweed knickers and a tweed cap. It was the middle of July.I described the game with an avant-garde style that has since been imitated, but never duplicated.Subjects I covered as a professional columnist included tennis, writers, politicians, and social figures. I was the ghostwriter of several books, mostly about golf.I was just crazy about golf; I was a great historian of the game and—if I do say so myself— a terrific writer. I wrote longhand and in pencil. In Heaven we use only Macs. It took me a long time to learn how to type. So now I dictate.I was acute on the complexities of the game and on the characters of the players. I was, in spirit, prelapsarian—uninterested in the issues of money, endorsements, or scandal of any kind. If I had a hero in golf, and even in life, it was certainly Bobby Jones, who won thirteen major championships as an amateur between 1923 and 1930 and then went on to help design the ne plus ultra of American golf courses: Augusta National, the site of the Masters. Jones was an educated athlete, a lawyer, a writer, and a reader; and we quickly became friends talking about books and the intricacies of golf. I learned a great deal from Bobby. About three days before Bobby's death, when I knew he was dying, I said to the members of his family: ‘If this is all there is to it, it sure is peaceful.” Well, Hell’s bells! It’s far from peaceful in Heaven! Actually, Heaven is much like Earth: greed, corruption, sexual abuse, humiliation, hypocrisy, scams, and plenty of violence. Except you can do just about anything you want here--within the Heavenly guidelines. I decided to write my own book of golf instruction.During my coverage of the 1958 Masters, I was searching for an appropriate name for that far corner of the course where the critical action takes place -- some colorful tag like those that Grantland Rice and his contemporaries loved to devise: the Four Horsemen, the Manassa Mauler, the House that Ruth Built, the Georgia Peach, and so on. A lover of jazz, I recalled an old tune entitled "Shouting in the Amen Corner."Now that I am in Heaven, I have been assured by The Great Greenskeeper that my writing, like the greatest game ever played, will live forever.Open Access PolicyYou are free to share, copy, or redistribute the materials in this text in any medium or format. You are free to adapt, reuse, modify, transform, or build upon the materials in this text for any purpose whatsoever.