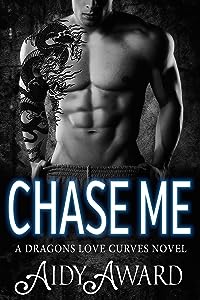 She's stolen a priceless relic from his treasure, and his heart.Ciara is the best damn wedding planner this side of anywhere, but she's no thief.That's exactly what the sexy-ass dragon shifter has accused her of - stealing his treasure.She's going to steal something of his alright, his sanity, if he doesn't let her go so she can get back to giving couples their happy ever afters.Its the best way to ignore the fact she's sure she'll never get one her own.Not with any man, or even a dragon.Jakob is either going to kill the sexy, curvy woman who denies she has The First Dragon's relic, or take her to bed and drive her as crazy as she's making him. Why does he want her so much he can't even properly interrogate her?Might have something to do with the way his soul is screaming at him to mark her, claim her, f*ck her, and make dragon babies with her.He can't give her his soul if she's already stolen it, or something darker and more dangerous has.Here's a free preview from chapter one of this brand new curvy girl and dragon shifter especially for you!Body made for sin? Was he kidding? Body made of sins, maybe. Namely the sins of Swiss meringue buttercream, chocolate ganache, and too many I Love Lucy reruns. “Stop staring at my toukas. Whatever you're looking for ain't in there.”She wiggled her back side to emphasize her point. That made her intruder damn irritated, probably that her rear wasn’t dropping any evidence of wrong doing based on the growl rumbling from his chest and his eyes glued to her bum. “Stop enticing me with your curves, thief. You can not distract me from what is mine.”Ciara cleared her throat, gently at first, but when that failed to bring his eyes up to hers, she about gave herself a sore throat trying to get his attention.“Are you ill? I won't have you dying before you tell me where the relic is hidden.”What an asshat. A cute one, but a real douchcanoe none the less. “I think maybe we've gotten off on the wrong foot here.” Ciara extended her hand to him. “I’m Ciara Mosely-Willingham.” Her hand hung there for a full count of ten. “And you are?”He recoiled from her hand. “Wondering what spell you're working on me. I assure you I am immune.”“I was trying to be nice, but I've had a very long and tiring day, so my patience is wearing thin. I don't have your thingy, I don't even know what a Why Vern is.” Ciara turned and began looking for her torturous heels. It would be much more fun to stomp off if there was some clack. “As am I. If you won't return what you have taken from me I will be forced to bring you before the AllWyr council.”He grabbed her hand and pulled her through the ball room toward a terrace. Good thing she'd already kicked off her shoes or she'd have been tripping all over her feet at the rate he was dragging her away. “Hey, stop right this instant or I’ll bring out the self-defense moves.”“Save your defense for the council. You’ll need it.”This dude was seriously wack-a-doo. “Let me go.”“Return my relic.”“I’m gonna make you a relic.”“Save your spells, witch.”“Your face is a witch.”The scary man released her and grabbed at his face. “Good try, witch. You’ll pay for that.”Ciara pivoted and bolted, weaving her way between the tables. One second she was zigging and zagging the next she was air born.Great claws gripped her shoulders and a deep whoosh-whoosh-whoosh sounded above her.She wriggled and screamed and frantically tried to see what was happening above and below her. Her feet crashed into empty glasses and caught a centerpiece of giant lillies dead on as she was dragged through the air above the tables. Before she could even take another breath to scream again they swooped out of the French doors, over the balcony and into the night sky. She glanced up not for a second fathoming that she’d see, flying above her, the giant wings, flapping gracefully through the sky, of a dragon.Read more Dragons Love Curves!