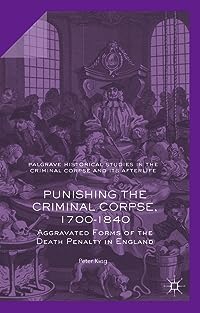 This book is open access under a CC BY 4.0 licence. This book analyses the different types of post-execution punishments and other aggravated execution practices, the reasons why they were advocated, and the decision, enshrined in the Murder Act of 1752, to make two post-execution punishments, dissection and gibbeting, an integral part of sentences for murder. It traces the origins of the Act, and then explores the ways in which Act was actually put into practice. After identifying the dominance of penal dissection throughout the period, it looks at the abandonment of burning at the stake in the 1790s, the rapid decline of hanging in chains just after 1800, and the final abandonment of both dissection and gibbeting in 1832 and 1834. It concludes that the Act, by creating differentiation in levels of penalty, played an important role within the broader capital punishment system well into the nineteenth century. While eighteenth- and early nineteenth-century historians have extensively studied the ‘Bloody Code’ and the resulting interactions around the ‘Hanging Tree’, they have largely ignored an important dimension of the capital punishment system – the courts extensive use of aggravated and post-execution punishments. With this book, Peter King aims to rectify this neglected historical phenomenon.