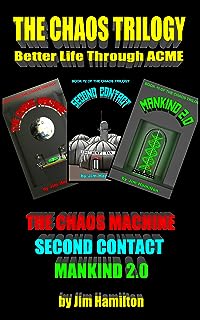 The Chaos Trilogy is a story about the past, present, and future of humanity as it struggles to rise above its natural proclivity for self-destruction. From the dawn of the Sumerian Empire to the sunset of the Shoomaran Empire, this is the tale of how it finally succeeds.The Chaos Machine: When the crew of a Shoomaran freighter find themselves stranded on Earth in 5342 BC, they learn that the native inhabitants are destined to die out in only a thousand years. Aided by a machine that can foretell the future, they are able to make minor changes from time to time in order to keep mankind on the path to survival. However, in spite of all of their efforts, one year from now, time will finally run out for everyone.Second Contact: When aliens from different parts of the Universe encounter each other in 5342 AB, old friendships are renewed and new friendships begin as 19-year-old Cassiopeia upends the ancient Shoomaran Empire. And when she's done, nothing in the Universe will ever be the same again.Mankind 2.0: When a solar super-storm hits the Earth, the end of the world as we know it becomes a new beginning for mankind. A society in which life is much better for everyone thanks to The ACME Corporation.