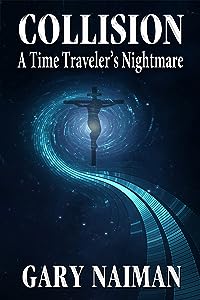 THE ULTIMATE TIME TRAVEL PARADOX!   The richest man on Earth is about to change his pathetic world. With war, pestilence, famine, and death looming across the planet, Harold Tensley will launch himself backward in time to alter all that has come before. Armed with a brilliant but intrusive computer, Tensley has spent his wealth building a time capsule capable of achieving his goal. There is only one problem, Tensley will soon collide with an unexpected visitor from another dimension and both men's struggle for survival will begin.   Collision is Gary Naiman's fourteenth novel and his fourth science fiction venture. His background includes twenty years at Paramount Pictures and classified projects in the chemical and weapons industries. One of his books, P.P.M., is being considered for a motion picture.