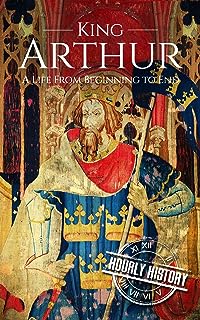 King Arthur* * *Download for FREE on Kindle Unlimited + Free BONUS Inside!* * *Read On Your Computer, MAC, Smartphone, Kindle Reader, iPad, or Tablet.Dating back to the fifth century, the legend of King Arthur, his Queen Guinevere, and the Knights of the Round Table is an integral part of British national mythology. From its beginning as a few lines of Latin text written in a sixth-century monk’s hand, Arthurian legend has blossomed over the years into a unique universe built on the real foundations of Britain’s Dark Ages and the principles of ancient chivalry. Inside you will read about...✓ The Era of King Arthur✓ Ambrosius Aurelianus✓ King Arthur and the Celts✓ Geoffrey of Monmouth✓ King Arthur’s Grave✓ The Round TableAnd much more!Liberally expanded over the years to include romantic entanglements, an imaginary ancient empire, and the threat of the supernatural, the legend of King Arthur remains as engaging today as it was in medieval times. King Arthur’s life, whether it happened or not, cuts to the core of the Matter of Britain and reveals the heart of Britain’s fanciful idea of its origin.