NORTH KOREA: Learn Everything You Need To Know About North Korea During The USA & North Korean Missile Conflict – IN LESS THAN 30 MINUTES 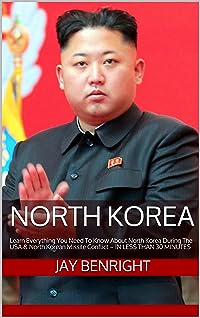 In the time that most people take to eat their lunch – around 30 minutes - this book will give you all the information you need to know about North Korea. Filled with page after page of interesting, unusual and fascinating facts about the history & leadership of North Korea, the people and their living conditions, the Military that is the 4th largest in the world and finally an update and analysis of the current missile dispute between the USA and North Korea.Did you know for example that 18 million out of 25 million North Korean citizens live without any electricity? Or that only 1.3 million people have a landline phone and 3.3 million people have a cellular phone? How about there are 28 “Official” Hairstyles that men and women must adhered to? Or over the past 60 years 23,000 North Koreans have defected to South Korea but only 2 South Koreans have defected to the North during the same period of time? And don’t wear jeans in North Korea because you will be arrested but smoke Marijuana? That is legal.Did you know that each citizen is required to vote but the ballots only have one candidate to choose from for each office? Did you know that the Supreme ruler name is Kim Jong-Un and his father and grandfather have been the rulers of North Korea since 1948? Did you know that Korean textbooks tell how his father Kim Jong-il, has performed amazing feats such as scoring a perfect 300 the first time he went bowling and sank 11 holes-in-one the first time he played golf? He was apparently born under a double rainbow and his birth caused a new star to appear in the sky. He learned to walk and talk before 6 months and has the ability to control the weather by his moods.Did you know that in 2013, North Korea’s President Kim Jong-Un killed his uncle by throwing him naked in to a cage with 120 starving dogs? And in 2017 two women who used a deadly nerve agent, according to Malaysian authorities, assassinated Kim Jong-Un’s older half-brother, Kim Jong Nam, at the Kuala Lumpur airport in Malaysia.These and many more fascinating facts about North Korea – many who source is the United States Central Intelligence Agency – are presented here for you to understand what may be the most unique country on the planet. There is also an analysis of USA vs. North Korea Military along with the current nuclear strike capability of the North Korean Government.