Franklin D. Roosevelt: A Life From Beginning to End (Biographies of US Presidents Book 32) 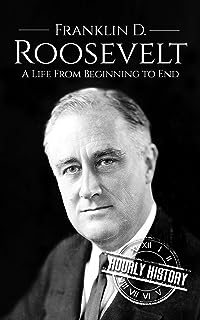 Franklin D. Roosevelt* * *Download for FREE on Kindle Unlimited + Free BONUS Inside!* * *Read On Your Computer, MAC, Smartphone, Kindle Reader, iPad, or Tablet.One of America’s most influential presidents was a man who could not walk. The polio that struck Franklin Delano Roosevelt when he was a future political star did not diminish him. Instead, against all expectations, it was the agent that forged his destiny. He came from an affluent family; a cousin, Theodore Roosevelt, had been president; another Roosevelt cousin, Eleanor, would become the wife who transformed the role of First Lady into her version of the bully pulpit. However, FDR’s path to politics was far different from the one that Theodore traveled. Inside you will read about...✓ The Roosevelt Household: Son, Mother, Wife✓ Politics and Infidelity✓ Roosevelt, the Paraplegic✓ Eleanor, FDR's Cousin and First Lady✓ The United States Enters War✓ The Death of the Longest Serving PresidentAnd much more!The pampered son of an elderly father and the strong-willed Sara Delano Roosevelt showed no particular acumen in his youth. FDR was not a scholar or an athlete of great renown. His romantic endeavors were awkward. What, then, created the dynamic leader who inspired a nation to believe in itself when it was reeling from the Great Depression and the shadow of war across the ocean? Perhaps it was adversity itself that transformed the golden boy into the tested president who vowed that America would not fall, that the economy would recover, that liberty would triumph over oppression. He had seen in his own life how, deprived of the use of his legs, he was nonetheless able to mobilize a nation by his energetic example. It’s true that Franklin Delano Roosevelt could not walk. But it was because of him that the United States of America was able, in the tumultuous years of the Great Depression and World War II, to remain standing when nations all around the world were falling.