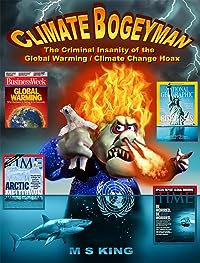 In bold and certain defiance of “the great and the good” who continue to proclaim “Global Warming” to be “settled science,” author M S King aligns himself firmly and proudly in the camp of what the media refers to as “climate change deniers.” What separates this work from that of so many other excellent books and documentaries which debunk the hoax of manmade “Global Warming” is that it provides a complete picture of the scam – one that not only encompasses the Fake Science, but also ties it into the public relations component and the historical geopolitical context which drives the “Climate Bogeyman.”It is self-defeating to “respectfully disagree” with the warmists. Any respect afforded to that crowd implies that they, in the words of one “denialist” film maker, are “not evil, just wrong.” To hell with pulling punches! These people need to be called out.Now there are indeed many innocent fools and dupes, including some scientists, who, under the influence of propaganda and “expert” authority, have obediently swallowed the dogmatic dung of “Global Warming” -- aka “Climate Change” -- and actually do believe in it. As for the inner circle movers and shakers behind the great scam; these EVIL conspirators know exactly what they are doing and they need to be placed on the defensive and called out not as fools or merely sloppy practitioners of science, but as the criminal hoaxsters that they and their invisible handlers truly are.Let’s unmask this gigantic fraud.