Elvis Under The Covers 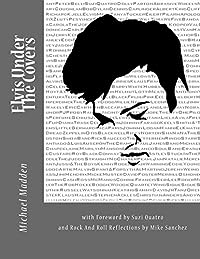 In August 1977 the world stopped when Elvis Presley passed away. As we acknowledge the 40th anniversary of his passing, it is appropriate to remember the full extent of the man’s legacy, a legacy that continues to grow. Elvis Under The Covers explores his influence through the artists that have recorded his most often covered original songs. These are Can't Help Falling In Love. In The Ghetto, Don't Be Cruel, Heartbreak Hotel and Jailhouse Rock. Glam rock legend Suzi Quatro has provided the foreword in which she describes the times that Elvis Presley touched her life, and when she touched his. Mike Sanchez explains the influence that The King had on his life and his career. There are also personal contributions from many of the artists featured in the book, including Eddi Reader, Mary Coughlan, Chris Spedding, Wanda Jackson, Kenny Vance, Al Kooper, Tanya Tucker and Stella Parton. These musicians, singers, actors and performers cover the whole spectrum of musical entertainment, from fame to obscurity, from number 1 hit makers to the occasionally bizarre, from cartoons to classics, and from religion to rock and roll. It is not often that a book can legitimately mention Bob Dylan, Andy Williams and the members of The Beatles alongside Bugs Bunny, Stephen King and a Camembert cheese (the reader will have to search for that one!) However, on a journey through this legacy there are many unusual connections, including a tenuous link between Jona Lewie and Howlin’ Wolf! The one thing that binds them all together, the essence of the journey that they have all chosen to take, is the elixir that is Elvis Presley.