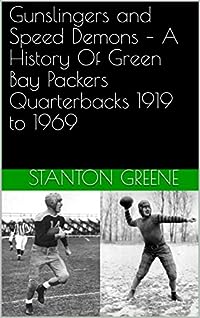 Who needs another book about the Green Bay Packers? Hasn’t everything worth saying already been said? If you want detailed histories, they’re out there, jam packed with amusing anecdotes and excruciating detail of every fumble, stumble and touchdown in the history of the team. The glory and the infamy, the fame and the folly, it’s all been said a hundred times. But in all those books, no one has ever focused exclusively on the one aspect of this fabled team that shaped the course of NFL history more than any other franchise, the passing game.While other teams were sending Bronko Nagurski up the middle for three yards in what amounted to a rugby scrum, Curly Lambeau was plotting how to get the ball downfield by doing the unthinkable, throwing it. His tailback Arnie Herber was the first to pass for a thousand yards in a season in 1936 and Cecil Isbell the first to break two thousand in 1942. Lambeau effectively created the wide receiver position when he split Don Hutson out wide and sent him downfield on a fly pattern in 1935. In the process, Lambeau won six championships in sixteen years from 1929 to 1944.Bart Starr won five more championships in the sixties quarterbacking Vince Lombardi’s legendary teams, the last three championships riding more on Bart’s arm than the fabled running game. Since 1992, the Packers have continuously fielded two of the greatest quarterbacks in NFL history in Brett Favre and Aaron Rodgers. Stretching back half a century to include Starr, Green Bay’s dominance at the position has been astonishing.This level of excellence at football’s most critical position extends even further into the early history of professional football. Before the creation of the T-formation and modern evolution of quarterbacking took place, the Packers were blessed with the presence of Charlie Mathys and Red Dunn behind center during the 1920s. Even during the lean years of the fifties, they had Tobin Rote.This is their story, in accomplishments on the field, in statistics and victories, with a sketch of their personal stories and a reference guide for football researchers. They’re all here, including Charlie Brackett, one of the first African-American quarterbacks in the modern NFL and Zeke Bratkowski, the ultimate relief pitcher who backed up Starr. Every Green Bay passer from 1919 to 1969 is here.This book is a celebration of that tradition and a tribute to the amazing men and athletes who made the Green Bay Packers a football power and passing leader over the last century. They’re all here, every Packer passer from 1919 to 1969, from Curly Lambeau to Bart Starr and receivers from Johnny Blood to Carroll Dale. So sit back and come along on an amazing journey that began nearly a hundred years ago. You’ll get all the numbers and personalities and the excitement season by season.The history is here and the stats to back it up. It’s designed as a fast, fun read, a jog through Packers history on the lightning feet of Hutson, Howton, Dowler, and a legion of fleet footed speed demons aided and abetted by a cocky bunch of gunslingers who started out wearing leather helmets and ended up the idol of millions. Few teams in any sport have been as entertaining as the Green Bay Packers over the last 98 years even when they were losing and this book proves it.Note: This book is included in the collected Omnibus edition combining Gunslingers and Speed Demons – A History Of Green Bay Packers Quarterbacks 1919 to 1969 and 1970 to 2016, available in Amazon Kindle and Paperback.Stanton Greene is the author of Lombardi’s Men, A Biography Of Every Green Bay Packer From 1959 To 1967, The Green Bay Packers - Dan Devine Years 1971-1974 and Brett Favre - Hall Of Fame, also available on Amazon Kindle & Paperback.