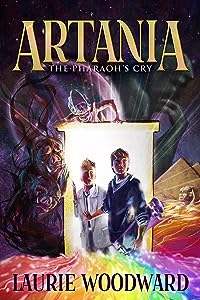 Can a kid who's forced to bathe six times a day save a magical world?Now eleven years old, Bartholomew Borax III can’t go to school, play outside and worst of all, make art. But he has to... So he sketches in secret. After he meets the skateboarding painter Alexander Devinci, they're both yanked into another realm by a magical painting.Their own world is nothing in comparison to Artania; a world with living paintings and sculptures. But Artania is on the verge of destruction, and his art is the only thing that can save it.With Egyptian gods and goddesses at his side, Bartholomew braves battles, duels and skateboarding escapes. With his growing powers, Bartholomew is the only one who can defeat the evil Sickhert's army and bring art back to the world.A unique fantasy adventure for all ages, Artania - the Pharaohs' Cry comes with a lasting message of hope: if one is true to himself, bullies can be defeated in worlds both fantasy and real.