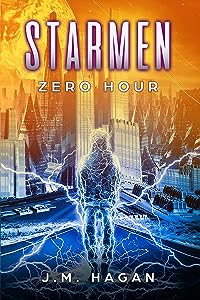 It’s zero hour and the team find themselves in a race against the clock when unexpected complications arise.Commander Jack Murphy and his crew have arrived to the cityscape – Delta-2 – with the cards seemingly in their favour. But they soon learn first-hand how dangerous time travel can be when their target, Vorjool, proves to be as elusive as he is menacing.Vorjool’s origins are unknown even to him. He has spent his life feeling alienated. After crash landing on a distant world, he discovers a link to his past. Exhilarated, he sets out on a journey across the stars to find answers, unaware the formidable team of Starmen Specialists are on a mission to assassinate him for crimes he may never commit.With the help of an artificial intelligence, he must fight for survival against bounty hunters, criminals, and an oppressive private security corporation who have segregated his home city from the rest of the planet.But neither Vorjool, or the Starmen chasing him, are ready for the ripping battle for survival ahead, as the fires of chaos consume the streets of Delta-2.Zero Hour – a tense, fast-paced entry in the Starmen series readers will not want to put down.