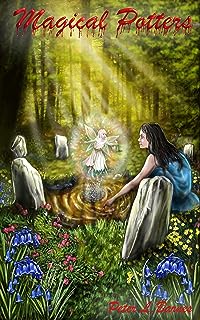 Magical PottersA chance discovery of hidden treasure by three Cornish tin miners, comes with sinister implications. It starts a lifetime of conflict between a psychic niece and her Uncle, whom she believes abducted her young sister and killed her father.Frustrated by her efforts to implicate her uncle or rescue her sister, she begins a lifetime of attempting to thwart his future. She creates a magical stone ring in the woods to try and contact her sister and father.Her first attempt at rescue ends in disaster but she is determined to continue her quest. Life moves on but takes a turn for the worse when she is captured and held in her Uncle’s cellar and it is her daughter who takes on the battles against the corrupt Uncle.Her powers gain in strength, as she is forced to endure her worst nightmare, and calls on ghosts from the past, to exact a meaningful revenge.