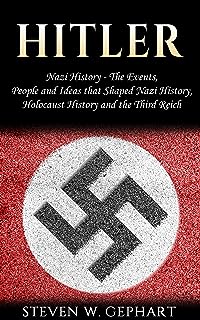 READ FOR FREE WITH KINDLE UNLIMITED Adolf Hitler is one of those historic figures that, on one hand, fascinate historians and common readers worldwide and, on the other hand, horripilate both categories. Most people know he was the leader of the Nazi party and that he triggered the Holocaust, the most serious crime against mankind ever committed. But that’s all some know about him. This book wants to be a quick, succinct guide on Hitler’s life, from childhood to adulthood and death. Because there are many conspiracy theories surrounding him on the Internet, it can be very difficult to distinguish the fact from the fiction. The objective of this book is to present the facts and the facts only to whoever might be interested in the history of World War II, Nazism and other terms that pertain to this era. Here is a list of the things you will learn by reading this book: - Facts about Hitler’s childhood and his aspirations as a child - His involvement in the 1st World War and what this meant for him, as well as his entry into politics when the war came to an end - His rise to power as a military leader and the things that facilitated this transition- The state in which Germany was before entering WWII, thus still under the blooming Nazi regime - How Hitler pictured the Third Reich and the aspects that account for his twisted racial vision of a Germanic paradise spread on all the territory of Europe - World War II, the most important battles, and Hitler’s death - Hitler’s dark legacy and the place he holds in European – if not world history. After you read this book, you will be able to have extensive discussions with your friends on the topic or, why not, pursue a career as a World War II historian.Scroll up, hit the orange buy button and get your copy TODAY!