From Handguns to Paintbrushes: A Memoir of Self-Destruction, Rock Bottom, Hope, Change, and Love 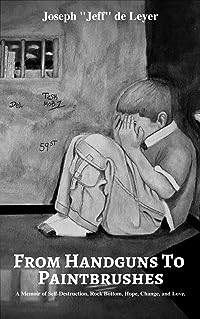 Jeff de Leyer is the grandson of a Dutch immigrant and equestrian champion, Harry de Leyer. This in itself, created an impression of a young man born into a world of privilege and entitlement. However, this could not be any further from the truth. His biological mother and father abandoned him on a doorstep when he was only three years old, leaving him with a void that was nearly impossible to fill. Jeff spent his teen and young adult years on the streets of New York making a name for himself as a drug dealer. This is where he not only found acceptance, but also a sense of family he so desperately wanted and needed. In 1998 at 21 years of age, Jeff was arrested and later convicted of a gang-related murder, after a drug deal went horribly wrong. In prison, he was a high-ranking member of the United Blood Nation, involving him in gang wars, fights, and riots. Rock bottom came years later at the age of 39. At this point, the only thing he was looking for was redemption. He decided it was time to walk away from the only life he had ever known. This is the compelling and true story of the rise and fall of a New York Ecstasy Kingpin. It is an eye-opening excursion through the pulse of the drug world, street life, drug addiction, prison, art and true love. Through his passion for art, desire for education and love, he rose above his circumstances to embrace a new vision of the world around him.