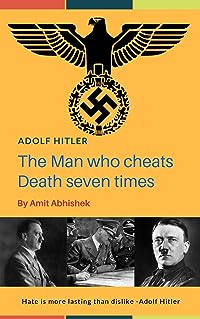 Adolf Hitler is one of the most notorious people ever born on the earth. He is directly responsible for the death of thousands of Jews and millions of casualties each year during the Second World War. His actions were such harsh, strong and destructive, that the effects of his action can still be found today. What made him into the monster? How he survives all the assassination plans? Was he lucky or have six sense? The major events in his life where he just manage to escape and cheat the death by luck are stated into different seven chapters in this book, which are:Surviving the war to ends all wars.The man who saved his lifeThe plan which failed by 13 minutesThe Paris PlotHenning brandy bombRudolf suicide missionAnd Hitler Survives the bomb attackNo doubt he was fortunate, Everyone who is born is fortunate to be human, some days are better and some days are not. Something in the course of life which no one can decide? If you are fortunate you may win a lottery or just avoid a big accident, but imagine can you survive an attack when many are planning days and night just to kill you?The ebook explains how hitler have nailed it and beats the death 7 times before being killed himself.