The People's Victory: Stories from the Front Lines in the Fight for Marriage Equality 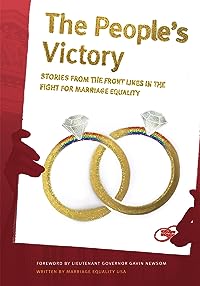 In 1996 a small group of everyday Americans, fed up with being told by allies that marriage equality was the "wrong" issue, and under attack by opponents who said their love and families were "not worthy" of the same institution, launched what would become the nation's oldest and largest grassroots organization for equal marriage rights. The People's Victory is a collection of their stories of how through education and advocacy, success and set back, everyday individuals across the country found their voice to resist, fight, and eventually bring equal marriage rights to an entire nation. The People's Victory shares deeply moving personal testimonies of men and women who lost their spouses to death, only to lose everything they've built for decades; parents who became activists to save their children; allies who acted to honor loved ones they have lost; and many, many more. Their stories are an inspirational map to anyone who has felt passionate about an issue, but questioned if their individual contribution could make a difference. In fact, that is the only way the people have ever been victorious.