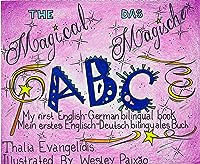 In the magical land a long, long time ago, where letters were known as shapes with curls and squiggles and lines with dashes and dots, illustrations were the means of communication.The magical ABC came about when I was displaying the alphabet to the children in my bilingual English-German kindergarten group. The objective was to relate the letters to words in a picture phoneticallyAfter much thought, I realized that there are many words in both languages that begin with the same letter and sound similar. Going through the alphabet many such words, mainly nouns, were highlighted and age appropriately selected and illustrated. In this way children are introduced to vocabulary in both languages simultaneously. The vivid, colourful and dynamic illustrations relate to the child’s reality.There are many similar words in English and German.Did you know there are many words with the same spelling and meaning in English and German? As you learn the English words, you will automatically know the German equivalent as well.The magical ABC is aimed at children of ages 3 to 7 years old.•3-4 year old’s are able to find, point to and learn the words illustrated with the assistance of a parent or teacher.•5-6 year old’s are beginning to recognize letters and associate them with their sound. In so doing they will be able to relate the letter to the word. •For 6-7 year old’s reading and recognizing the words and appreciating the pictures for themselves will be an enjoyable experience.The book uses pictures of familiar items easily recognized by children.The large uppercase and lowercase letter appears on the page along with the words, in both English and German. The list of words on each page are in random order. The same letter in the illustrations is large and clearly shows the items the letter portrays. The magical ABC book has a predictable pattern in the way the objects are presented to the reader. First the letter in both cases, then the words, in both English and German, followed by the illustrations of all the words, on the opposite page. The vibrant images capture the young readers attention.This English German Bilingual book is perfect for children in an environment where they are exposed to both languages throughout the day. Many words in both languages are the same or very similar as they both originate from one and the same language.