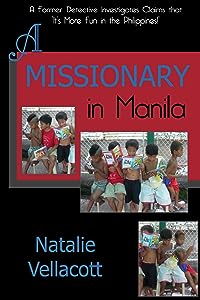 Natalie Vellacott, a former police officer, set off from England hoping to make a difference as an independent missionary to the Philippines. After a bumpy beginning in Olongapo City, she settled in the nation’s capital Manila becoming quickly immersed in Filipino culture. Attached to an evangelical church in Cubao, she worked with the homeless people for several years. How do you deal with a landlord who wants immediate access to your dwelling at all hours of the day and night? What to do when a large group of barely clad homeless people are eagerly awaiting a Bible study in the middle of a typhoon? Or when the bus you were hoping to travel on has a list of suspended conductors? Where to turn when an eight months pregnant, homeless lady faces the very real prospect of giving birth in the street? Or when a little beggar girl says that a relative put her in a sack and threw it in the river? Who will win the battle for supremacy, the kitten, the cockroach or the ever- growing numbers of mice that have invaded? And of course, what has happened to the “rugby boys” addicted to solvents? Find answers to these questions and others as Natalie seeks to bring the Good News of saving hope in Jesus to Manila’s urban poor.